Anderlecht manager Hein Vanhaezebrouck has over the past week made it very clear he’s prepared to tell Henry Onyekuru how it is, and do so publicly.

After claims of Barcelona interest, which were almost certainly nonsense, and Oneykuru’s public desire to return to parent club Everton in January, Vanhaezebrouck hasn’t been afraid to bring the player down a peg or two.

Ahead of the weekend, Anderlecht Online quoted the manager as explaining his Everton loanee isn’t ready to be a striker: “I’ve already tried it a few times, but that did not work out well.

“Henry doesn’t currently have the feeling to make the right movements from that position. He may think he can, but on the basis of what I see, it’s clear that he doesn’t have the feeling, he looks for his position, often stands still and doesn’t know where to go.”

That may have been Vanhaezebrouck’s attempt at mind games, and if so it didn’t work perfectly.

Following Anderlecht’s 4-0 victory over KV Kortrijk, the manager was again unhappy with Onyekuru.

Het Belang van Limburg quote him as saying: “Henry has to stop thinking that he’s only about his goals…. the sum of his dribbles must be positive after 90 minutes. Not negative, as now. Especially if he has so much space and as little resistance as against 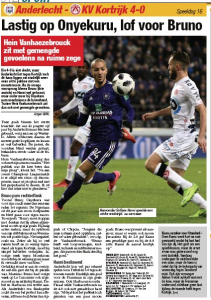 Kortrijk, he should avoid simple ball losses. Yes, last week against Mouscron he scored the winning goal, but I expect more from him.”

How Onyekuru takes his second dressing down in a few days is anyone’s guess.

The 20 year old feels he’s ready to move to Everton, although he hasn’t the work permit to allow a Goodison Park arrival,. There’s every chance claims of interest from other clubs, whether real or not, are only serving to underpin the player’s belief he’s more advanced than Vanhaezebrouck wants to give him credit for.

Whenever Everton do get around to sorting out a new manager, this is a situation for him, and Steve Walsh, to keep an eye on.