Home Europe Everton’s ‘interesting offer’ listed by club as one of the reasons for...
SHARE

Barcelona signed Yerry Mina from Brazilian club Palmeiras earlier in January, only to sanction his sale to Everton in the summer transfer window.

In his short spell with the Catalan club, the centre-back’s playing time at the Camp Nou was limited as he played 370 minutes in the league across five appearances. Ernesto Valverde’s side signed Clement Lenglet from Sevilla before the start of the season, which was the final nail in the coffin.

The arrival of the Frenchman, coupled with the need to make room for non-EU players in the squad saw the La Liga winners part ways with the 24-year-old.

His form for Colombia at the 2018 World Cup helped him draw a lot of attention prior to his switch to the Merseyside club. Having paid €11.8m to Palmeiras for the defender, the Spanish champions sold him for €30.25m.

Catalan newspaper Sport interviewed Barcelona general manager Pep Segura, and he was asked about the club’s decision to allow Mina join the Toffees.

“Arrived in the winter market from a different football league. He arrived young and we knew he could have problems of adaptation. He did not have the minutes to adapt to our style and when we thought about what to do [with him], we received an interesting offer,” Segura said. 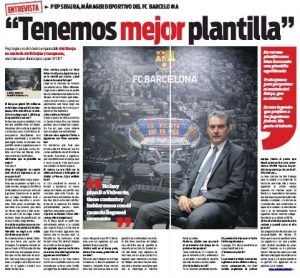 Since joining Marco Silva’s side, Mina is yet to make his debut for the Premier League club as injuries have forced him to spend time on the sidelines.