Home Europe Carlo Ancelotti says he has his eye on ‘prestigious trophy’ for Everton...
SHARE

Brought in to redress a sorry Everton team, Carlo Ancelotti has done just that in little over a year.

The squad the Italian manager inherited from Marco Silva was rather imbalanced, yet, slowly but surely, with the help of Marcel Brands, things have started looking up.

Important acquisitions were made during the summer/autumn transfer window, including those of Allan and Abdoulaye Doucouré, and a terrific start to the campaign has put the Toffees in a healthy league position going forward.

So much so, in fact, that hope of European qualification, last felt during the 2013/14 season, has returned to Goodison Park.

At least, that’s how Ancelotti himself sees it, revealing to Gazzetta dello Sport what he wants to achieve come the end of the campaign. 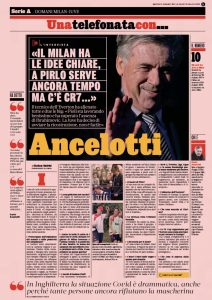 He said: “Return to Europe. At the moment, we’re in the race for the fourth spot with Leicester, Aston Villa and Chelsea.”

As for whether winning the FA Cup could be another way of ensuring Everton play in a European competition next year, he added: “The English cup is the oldest football tournament in the world, and we want to honour it in the best way possible. Winning the FA Cup means putting a prestigious trophy in the cabinet.”

The Toffees currently sit seventh in the Premier League having played 16 games, equal on points with Southampton and Manchester City who have played one game more and one game fewer respectively.