Fotomac claim Galatasaray are moving closer to loaning Henry Onyekuru from Everton for another season.

The Nigerian winger was one of the best performers last season for the Turkish club and subsequently Galatasaray want to bring him back in on a temporary basis. Onyekuru was their top scorer, helping them to a league and cup double.

It’s reported Galatasaray board member Sukru Haznedar was in England last week and he was trying to convince Everton over another loan deal.

According to Fotomac, if he manages to convince the Merseyside club, Gala are ready to pay €2m to loan Onyekuru for another season.

The Nigerian winger will also earn himself a pay increase and will receive €2m a season, if the Istanbul club can get an agreement with the Toffees. 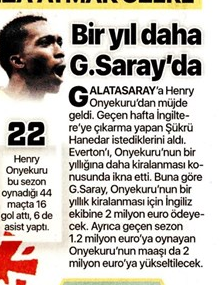 Galatasaray will be looking to get a deal done as quick as possible in case his value increases whilst playing with Nigeria in the upcoming Africa Cup Of Nations.

There have been reports the young winger could move to Spain following comments made by his agent last week. He also said they were working on a deal with Gala with regards to a return.

However, William D’Avila has contradicted this to the Spanish media by saying he didn’t speak about a move to any La Liga club but did reveal his client is eager to make the step up and play in a major league.