Home Europe ‘Everton won’t sell him’ – Toffees player not even getting on the...
SHARE

Italian newspaper Tuttosport have published a big features on AC Milan’s quest for a new striker. Krzysztof Piątek was the best thing since sliced bread just a few months ago, yet a relatively poor period has seen patience vanish.

Olivier Giroud and Luka Jovic are among the names being considered, but it turns out they also have some interesting information on Everton’s Moise Kean, who could be part of the list, but isn’t.

They describe the 19-year-old as being on ‘the negative side’, since they’re not very confident that Milan could land him soon. That’s because ‘Everton won’t sell him’.

Although Kean signed for the Toffees in a €27.5m move from Juventus last summer, the Italian media keeps pushing for his departure from the club, since he’s not playing as much as expected.

The striker has only 407 minutes for Everton so far, and is still to score his first goal for the club. And it seems as long as he doesn’t 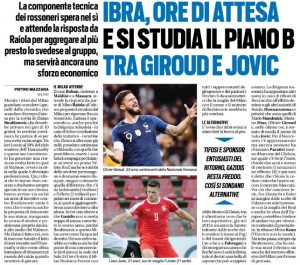 find his best form, Italian papers will continue to consider him a possible target for Serie A clubs.

Then if and when he does hit form, they’ll no doubt be linking him with a return to Italy anyway.