Everton and Wolverhampton Wanderers have cooled their interest in Barcelona defender Jean-Clair Todibo as a result of the Spanish side’s asking price.

The French centre back has long been linked with a move away from the Camp Nou, having seemingly failed to make the grade at the club.

He spent last season on loan with Schalke, and it is widely expected he will be moved on this summer as Barça look to raise funds to bring players in.

Everton have been credited with an interest on several occasions, with reports even stating that ‘everything’ points to him moving to Goodison Park.

They are not the only Premier League side seemingly keen, though, as Wolves emerged as rivals for his signature back in July.

However, it appears that both have now cooled, with L’Equipe reporting that Barcelona’s asking price has scared them both off.

They cover the defender’s future today, stating that the former Toulouse man knows he has to make his mind up about what he will do this summer

Barcelona have already made their position clear at a recent meeting; they want to get rid and have set a €25m asking price for him.

If they can’t sell, he will ‘enter the rotation’ so the player has to decide whether to stick or twist and get game time elsewhere. 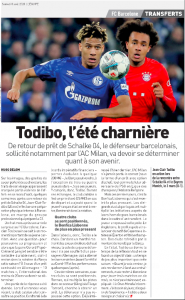 The choice is his and, should he elect to move, he has four options on the table at present.

One is French side Rennes, who are looking for a loan deal while Italian duo AC Milan and Atalanta are also monitoring him.

The last on the list are Benfica, who been ‘the most pressing’ and opened negotiations with Barça in recent days.

The England option, though, appears to have been pulled away as both Everton and Wolves were left ‘chilled’ by the amount that Barcelona were looking for.

The newspaper does not definitively state that they’re out of the race but, unless they can convince Barcelona to lower their asking price, that appears to be the case.