Home Europe Everton are willing to offer €30m for player who has ‘many options’...
SHARE

Catalan newspaper Sport takes a look at the players who could help Barcelona bring in funds to the club with their sale, and Andre Gomes is one among them.

After struggling for two years at the Camp Nou, the La Liga winners allowed Andre Gomes to spend the 2018/19 season on loan with Everton.

Under the guidance of Marco Silva, the midfielder impressed during his time at Goodison Park and his performances for the Toffees have seen him attract further interest.

It’s claimed the former Valencia man has ‘many options’ to continue in England and is drawing attention from the Merseyside club, Tottenham Hotspur and West Ham United.

The report states Everton are willing to put €30m on the table for the player. 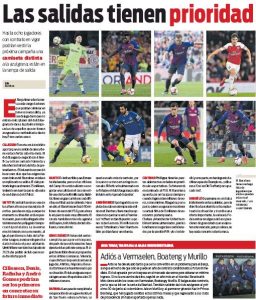 It’s further claimed Spurs and Manuel Pellegrini’s side could also make an effort in landing Gomes in the summer transfer window.

Other claims from Catalonia today say Barca want €25m, so Everton’s €30m should be enough.