Takvim report Besiktas are in a hurry to sign Shinji Kagawa on a permanent deal from Borussia Dortmund because of interest from other clubs, including Everton and West Ham United.

The Turkish newspaper claim Everton and West Ham are both looking to sign the Japanese playmaker this summer but Besiktas are hoping they can beat the two Premier League clubs in the race to sign the player.

Both Everton and West Ham will be looking to add to their squads ahead of next season and it seems the former Manchester United man is an option.

According to Takvim, Kagawa also has admirers from Bundesliga, with Schalke and Bayer Leverkusen both reportedly tracking the Japan international. 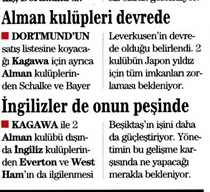 Kagawa has been in impressive form for Besiktas since joining from Dortmund on loan in the last window. The attacker has scored three goals in six appearances for the Black Eagles.

The 30 year old is under contract the German side until June 2020.

Given Kagawa didn’t really excel at Manchester United, and then struggled to impose himself back at Dortmund, he’d certainly be fortunate to have interest from Everton and West Ham.

Maybe this is a case of pressuring Besiktas into a quick deal.