In their magazine last week, SportBild launched Max Kruse rumours. Claiming several Premier League clubs are interested in the Werder Bremen, SportBild didn’t need to provide any further encouragement to set off the English media on the trail.

In their magazine this week, SportBild once again say that Kruse’s future at Bremen is uncertain, and Premier League interest is mentioned once again. Whilst the original claims credited Everton, West Ham, West Brom, Stoke City, and Southampton with interest, this week’s article only mentions the Toffees and Hammers.

Everton and West Ham don’t monopolise the interest, and it’s made clear that it’s clubs including them who are keen, but the whole thing seems pretty much stagnated.

There’s no claims of moves for the player from Everton, West Ham, or 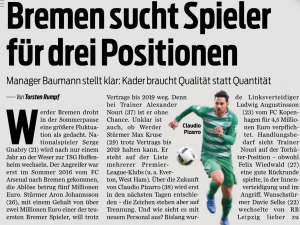 anyone else, and no clubs said to be preparing offers to sign Kruse.

With 15 goals in 23 Bundesliga appearances last season, it’s no wonder 29 year old Kruse is attracting interest. But, right now, that seems all it is.