Everton and West Ham United are both interested in Benfica midfielder Jota, according to reports from Portugal today.

Newspaper Record says the Premier League sides have been in touch with the Eagles to know the conditions for a possible deal.

It’s claimed that Jota was actually close on moving to Valencia on a loan deal, but Everton and West Ham are now ‘battling’ to scupper the move.

With Benfica open to negotiate him, there’s a good chance the English sides could end up convincing them to cancel his transfer to Spain. 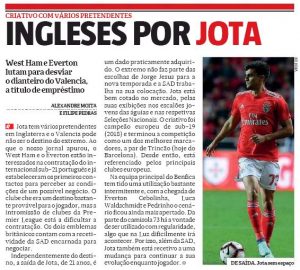 Record doesn’t say how much Benfica are demanding for Jota. Even though Jorge Jesus doesn’t count on him for the upcoming season, they say he’s ‘well rated’ in the transfer market.

Since Valencia were ready to take him on a loan deal, perhaps Everton and West Ham could also sign him on a temporary move with better conditions, or even with a buying option included.

Either that or they just pay the money up front to get him, and just be done with it.