Having arrived at Marseille from AS Monaco in 2015, Lucas Ocampos’ contract with the French club will expire in 2020.

The winger has scored four goals and registered six assists in 30 league appearances this season out of which two goals and five assists came since the start of February.

Calciomercato has a short report on the 24-year-old and the headlines reads ‘Everton: like a former Milan player’ and within the story, it’s explained the Merseyside club ‘want’ the Argentine.

His agent Pablo Sabbag is eyeing a move to England for his client and the player’s representative wants to ‘test the English market’.

The South American, on the other hand, has other plans and his desire is to put pen to paper on a new deal with the Ligue 1 outfit so that he can extend his stay at Marseille. 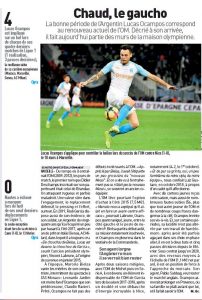 Ocampos and his family are happy with their life in France.

If Everton are to keen on acquiring Ocampos’ services, they need to make a considerable amount of effort in convincing him to make a switch to Goodison Park.