Everton remain keen on a deal for Inter Milan midfielder Matías Vecino this summer but could face competition from Napoli for his signature.

The Blues are on the hunt for a central midfielder this summer with that position having been a problem one for them for several seasons.

They have been linked with several potential targets, and, according to Tuttosport, Vecino remains one of them.

The Uruguayan midfielder was a rumoured target throughout the January transfer window, and several reports indicated that a deal was being negotiated with Inter Milan.

Ultimately a move did not happen as the Italian side elected to keep him until the end of the season and the Blues focused on the summer instead.

Tuttosport believe that he could still depart Italy this summer, though and Everton, led by Carlo Ancelotti, want him ‘first of all’. 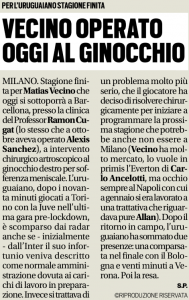 However, they explain that there could also be interest inside of Italy with Napoli and AC Milan also having ‘worked on a negotiation’ during the January transfer window.

For now, Everton and any suitors will be waiting to see how Vecino recovers from surgery as the midfielder has elected to go under the knife to fix a meniscus issue in his right knee.

The Uruguayan is set to be operated on by Professor Ramon Cugat today as he looks to ‘start planning for next season’ and how he recovers will surely be a determining factor in whether he moves this summer.