Home Europe Everton unwilling to spend €15m on target, which may be understandable
SHARE

As well as West Ham, Everton have been a recurring name in the Edin Dzeko rumours, but it appears they aren’t quite as keen on the Bosnian as the Hammers.

Needing a striker, as Cenk Tosun and Dominic Calvert-Lewin aren’t quite doing the job, the Toffees have considered making a move for the former Manchester City goalscorer, although they have their limits.

Corriere dello Sport on Friday explain Dzeko’s adventure is Rome is coming to an end, going as far as stating he is ‘packing his bags’, and the London club are ready to pay €15m for his services.

Just after that, Everton are mentioned, but the Italian newspaper explain they aren’t prepared to go that high. 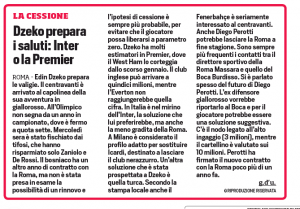 Considering Dzeko recently turned 33, that might be a wise decision, as any club lumping on him now would be gambling on a player entering his twilight years with no guarantee of improved performance on his current campaign.

In case you were wondering, his stats this season are 12 goals and eight assists in 32 appearances, a far cry from his 24 in 49 from last season.