Everton remain interested in Roma’s Cengiz Ünder but now face competition from Napoli for his signature.

That’s according to Corriere dello Sport, who report that everyone at Napoli is keen on signing the Turkish international.

Ünder has been liked with a move to Goodison Park for several months, with the Blues in need of reinforcements on the right-wing and Carlo Ancelotti believed to be a fan.

So far there has been nothing further than paper talk and Corriere confirm that Everton are still in the mix today, claiming that he is liked by those in charge at the club.

However, there is increasing competition for his signature, with Napoli having joined the race as they plan a summer overhaul themselves.

The newspaper explains that a few weeks ago the two clubs, Napoli and Roma, were discussing a swap deal involving striker Arkadiusz Milik and Ünder.

However, that fell by the wayside as Milik received offers from elsewhere and Roma decided they were more than happy to stick with Edin Dzeko upfront. 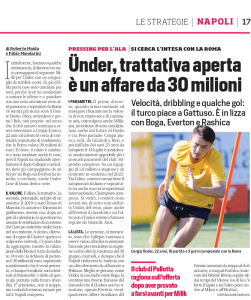 Such negotiations died down, but Napoli are particularly focused on finding a new right-winger to replace José Callejon, and Ünder is on their list of targets.

So negotiations are now underway for him, with Gennaro Gattuso believing he would fit in well to the front three he is planning and everyone else at the club agreeing it would be a good deal.

Roma want at least €30m for their man, particularly because 20% is going to Ünder’s former club Basaksehir and ‘contacts are underway’.

However, Corriere insist there is nothing ‘definite’ as yet, and that is because of Everton, who also ‘like’ Ünder, the suggestion being they are the main rivals for his signature.