It’s claimed Comolli has met with Bolasie and offered him a chance to join the Turkish giants.

According to AMK Spor, the 29 year old wants to stay at Everton but his club teammate Cenk Tosun has talked to him personally about the lifestyle in Istanbul.

The Turkish newspaper now suggests Bolasie would be happy to join Fenerbahce after this feedback from Tosun, and that talks between Everton and Fenerbahce are set to continue over the coming weeks. 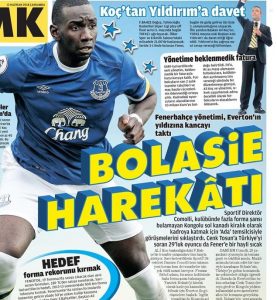 Bolasie returned to the Everton side on Boxing Day after a knee injury kept him on the sidelines for almost a year. The attacker played 16 games in the last campaign, scoring one goal.

Comolli is looking to rebuild Fenerbahce’s squad after recently being appointed the club’s sporting director, and there have also been reports they are very close to confirming Jurgen Klopp’s assistant Zeljko Buvac as their next manager.