Home Europe Everton transfer ‘has not been discussed’ by club yet – Toffees player...
SHARE

It’s now been five months since Everton goalkeeper João Virgínia signed for Sporting on a loan move. He has until the end of the season to prove himself at the Lisbon side and perhaps be signed via a €3.5m buying option the Lions have over him.

That’s why every time he’s about to get a chance to play for the Portuguese club, the local media comes up with a different story about the big opportunity he’s getting.

It’s no different today, as Virgínia is set to start in the Allianz Cup semifinal against Santa Clara tomorrow, and Record features a new piece saying he’ll try to gather ‘new arguments to try to convince’ Sporting to keep him.

Now the most curious claim in this article is that, according to the outlet, the Lions haven’t even considered triggering the buying option so far. 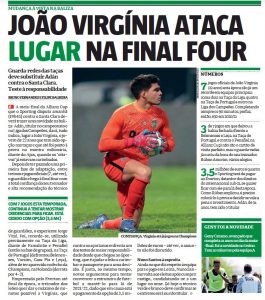 Record writes that the subject ‘has not been discussed’, as the Lions are more likely to analyse his spell at the end of the season.

Virgínia has seven appearances for Sporting so far, with seven goals conceded and three clean sheets. All of them were played in cup competitions, and his debut in the Portuguese League is yet to come.

The goalkeeper’s contract with Everton runs until 2024.