Two days ago, The Sun in England reported Diego Costa is ‘ready for Everton switch’ as the striker wants to leave Atletico Madrid in the summer transfer window.

It was explained the 30-year-old is ‘open to discussing’ a move to Goodison Park to solve the striker woes for Marco Silva.

The Sun also suggested the Merseyside club are ready to go against their policy of only recruiting players in their 20s.

These claims have caught the attention of Spanish newspaper AS and they claim Atletico have not received any concrete offer for Costa so far.

AS states ‘Costa wants revenge’ after he endured a difficult season last term. The Brazil-born Spain international has returned to preseason with a desire to prove his worth at the club.

The former Chelsea star is focused on Diego Simeone’s side and his intention is to continue at Wanda Metropolitano. 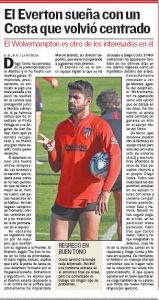 AS also makes it clear that clubs interested in signing the attacker must be willing to meet his current salary demands of €9m net per season.

It’s highly unlikely that Everton will splash that cash on a player who will turn 31 in October.