Everton and Tottenham have ‘recently’ made ‘enquiries’ for PSV Eindhoven manager Roger Schmidt, who is looking likely to leave the Dutch side this summer.

That’s according to SportBILD, who cover the situation around the PSV boss and how he may be heading to the Bundesliga at some point.

They say that whenever things are not going well at a club in the Bundesliga, Schmidt is a name that always comes up.

His name is ‘on the lips’ of many, particularly because Schmidt is only under contract with PSV until the end of the season.

The Dutch side want to keep him, and talks have been started but Schmidt is ‘hesitating’, and there are many indications that he will leave at the end of the campaign.

That’s because PSV lack the strength to seriously challenge Ajax at the top of the table, and while Schmidt ‘feels at home’ and enjoys the development at the club, two years is more than enough.

After stints in the Bundesliga, Austria, China and Holland, he can ‘well imagine’ a spell in another country and would like either Spain or England. 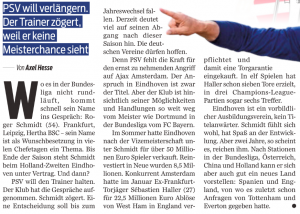 In terms of the latter, there have already been enquiries, and both Everton and Tottenham are said to have done so ‘recently’.

SportBILD offer no suggestion on how recently, but we’ll assume it was this summer, given both clubs went on lengthy hunts for new managers at this point.

They’re now settled on Rafa Benitez and Antonio Conte, though, so it’s hard to see either being options at the end of the season, not unless things go drastically at Everton or Tottenham.

That doesn’t mean there won’t be other interest in Schmidt from England, so we’ll keep an eye on any rumours that may pop up in the coming months.