Barcelona defender Yerry Mina has been attracting interest from across Europe following his display for Colombia at the 2018 World Cup.

On Tuesday, RMC Sport reported about Lyon and Manchester United, while Tuttomercatoweb talked about Arsenal and Southampton links. However, it is Everton who have been linked the most with the centre-back.

The 23-year-old’s uncle and agent, Jair, has already confirmed Everton is a club “that insists on the player”.

Mundo Deportivo reported on Monday the player’s representative was set to arrive in Barcelona on Tuesday to clarify his client’s future. 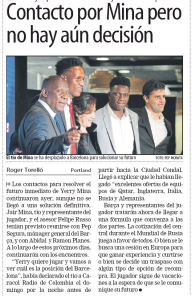 It’s stated ‘contacts to resolve the immediate future’ have continued as all parties are yet to arrive at a final solution. The La Liga winners and Jair are looking to find a formula which will please both the club and the player.

Barcelona need to decide if they’ll allow Mina to go out on loan or leave on a permanent transfer with a buy-back option. He is currently on holiday and waiting to hear from his agent to find out about his future.