Werder Bremen’s Danish midfielder Thomas Delaney has been on the radar of Premier League clubs this summer.

We covered reports from Germany earlier in the window that Everton were showing an interest in the Denmark international, and a bid of €12m from Brighton and Hove Albion was later rejected by Werder Bremen.

Burnley are the latest English side to be linked with the player, just a couple of weeks after the Brighton approach.

Kicker journalist Torsten Rumpf has quizzed Delaney about Burnley wanting to sign him. “I don’t know anything about it. At some point in the future, I would like to play in the English Premier League. However, my first goal was a transfer to the Bundesliga. I don’t see myself at Bremen in such as position as I had been before in Copenhagen: there, I had a feeling I have already achieved everything and that I could not improve there anymore.”

Werder Bremen’s sporting director Frank Baumann said Delaney would not be leaving the club, due to the fact he only arrived at the German club during the last window. These comments came after Werder also rejected Brighton’s offer to sign the player. 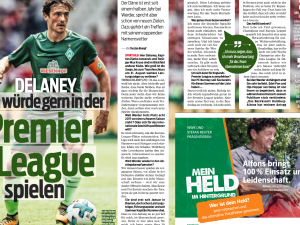 With Everton and Brighton both failing to convince Werder Bremen to let Delaney come to England, it’s unlikely Burnley would be able to pull off a deal in this window.

It may be worth pointing out that there haven’t really been Burnley links, so either Kicker have got them confused with Brighton or the list is growing.