Everton are keen on a move for Eintracht Frankfurt striker Gonçalo Paciência in the January transfer window.

The Blues have struggled for goals this season, with Moise Kean yet to open his account and both Cenk Tosun and Dominic Calvert-Lewin hardly specific.

It has sparked suggestions they may look to add extra firepower in January, and it seems they have their sights set on Paciência.

According to Record, Everton manager Marco Silva has made the 25-year-old striker one the club’s ‘priority targets’ for January.

The Blues are already pushing ahead with the move, as Director of Football Marcel Brands is talking with the German club to try and find a way to get a deal done.

They are not exactly keen to lose Paciência, who has nine goals in 23 games in all competitions this season, although they do have back up should they lose him.

Everton want to pay around €15m but Frankfurt value the striker more around the €20m mark, which is not an impossible difference to make up by any means. 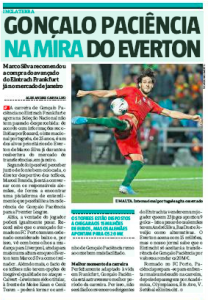 While his club aren’t keen, Paciência is. Record says he earns a ‘low salary’ in Germany so would welcome the move to Liverpool, especially as Marco Silva is also at the club.

He also fancies his chances of being a regular in the team given Everton’s current attacking options, further suggesting he could push for a move.