With Torino having trouble to find a midfield reinforcement in Italy, it seems the Serie A club may go shopping in the Premier League as an alternative, with Everton, Watford and Stoke all holding alternatives.

Local newspaper Tuttosport has a story today saying Torino are having a hard time to sign Godfred Donsah from Bologna, since the clubs can’t agree a fee for the player.

That’s why the Turin side will have to look for other options, and there are actually three names on the list, all belonging to British clubs. 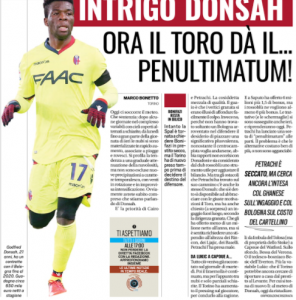 These three would be Muhamed Besic from Everton, Étienne Capoue from Watford and Giannelli Imbula from Stoke City, who’s currently on a loan at Toulouse.

Torino are offering €6m for Donsah, and the problem with the alternatives would be they are much more expensive.

Therefore, it’s safe to say the Serie A side will only land one of these Premier League player in case the selling club accept to give a big discount.

Imbula has had a troubled time at Toulouse, so Stoke may listen, and Besic isn’t having a good season at Everton, for various reasons, whilst Capoue is a used member of the Watford squad.