Everton goalkeeper Jordan Pickford has been valued at a massive €62.5m by the latest CIES Football Observatory report.

With goalkeeper values rising quickly in recent years, and Pickford securing himself as England’s first choice, the Everton player is now worth far more than what the club paid Sunderland for him.

CIES judge their valuations based on a variety of factors including level, age and contract length. Pickford still being just 24 years of age, young for a goalkeeper, and having a contract lasting until 2024 has obviously helped him push up the list.

He’s the third youngest in the top ten, with Chelsea’s Kepa a slightly younger 24 year old, and Gianluigi Donnarumma just 19 years of age.

There are six Premier League goalkeepers in the top ten with Ederson in first place, Alisson in third, Kepa fifth, Pickford sixth, Hugo Lloris in ninth and Bernd Leno tenth.

David De Gea doesn’t make the list, which will largely be due to his contract situation at Manchester United. 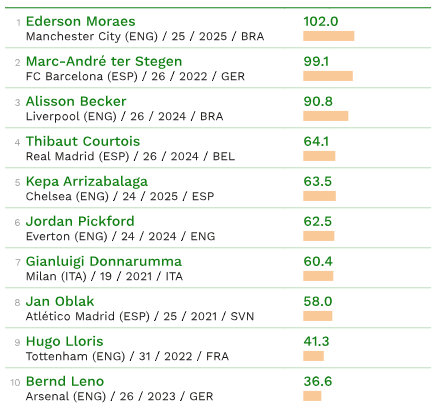