There’s renewed confidence in France that Idrissa Gueye can move to PSG during the current transfer window… and of course there’s a new price tag on the deal.

The French media have been throwing out all kinds of claims regarding how much the Toffees are demanding for an exit during the January market.

PSG had in the past few days moved on to an attempt to sign Leandro Paredes from Zenit, but the Russian club aren’t playing the way the French champions would like.

That led to a €25m offer being presented to Everton on Monday, report L’Equipe.

That isn’t enough for the Premier League club, but the French newspaper states demands have now dropped from €40m to somewhere between €30m and €35m. 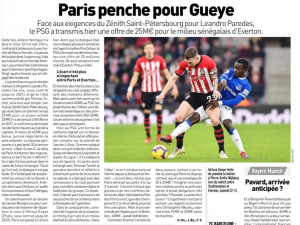 Gueye himself is said to be determined to sign for PSG, and has told those close to him that he’s confident the move will happen.

In Paris they believe a signing can be done in the next 24-48 hours, and that’s thought to be possible.