Premier League sides Everton and Southampton have once again scouted a Benfica game this week.

As reported by Portuguese newspaper A Bola, officials from the Toffees and Saints watched the Eagles beat Marítimo 6-0 at the Estádio da Luz on Monday night.

Although both English sides keep watching Benfica play, they haven’t been seriously linked to any players from the club in the past few months.

This time, they watched a fantastic display from the Eagles, with goals scored by João Félix (twice), Pizzi, Cervi (also twice) and Salvio. 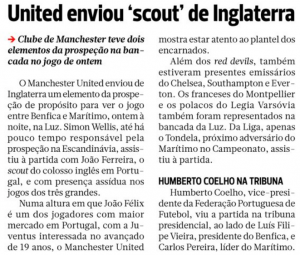 João Félix was the man of the match, as he continues to impress for the Lisbon side. But his €120m release clause and the expectation for a huge auction make Everton and Southampton unlikely competitors for his signing.

Other Benfica players such as right-back André Almeida, midfielders Florentino and Pizzi all had a great performance, and they look more possible for both clubs.

With both in need of a prolific striker, it’s maybe worth keeping an eye on Haris Seferovic, who has scored 23 goals this season and isn’t considered to be untouchable for the Eagles, although he’s protected by a €60m release clause.

Everton have been struggling to find a goalscorer since the departure of Romelu Lukaku, while the Saints have only 14 goals scored by Danny Ings, Charlie Austin and Shane Long altogether this season.

We’ve lost count of how many games in Portugal the two English clubs watched this season, so we wouldn’t be shocked to see them bidding for Benfica players in the summer.

Manchester United, Chelsea, Montpellier and Legia Warsaw all sent scouts to this match as well.