It’s hard to forget the saga involving Adrien Silva last summer, when the player was ready to join Leicester City but saw Sporting stop the deal at the last minute.

The Foxes’ interest didn’t stopped there, as reported by Record today. It’s claimed that despite Claudio Ranieri’s sacking, the club are still monitoring the Portuguese midfielder.

Besides Leicester, Everton and Southampton are also said to have made enquiries for the player recently. But what all the clubs are hearing is that Adrien is only leaving for €40m next summer. 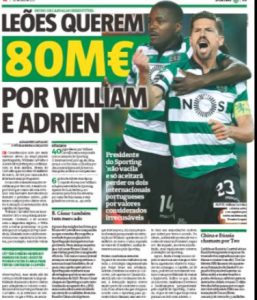 Adrien has a €45m release clause. When Leicester City though they had found a deal for a double transfer last summer, they ended up being told that only Islam Slimani would leave for less than the clause, and that’s when Adrien’s move was blocked.

Although the player even gave an interview expressing his wish to join the Foxes, he ended up reconciling with Sporting fans and took back his important role as a captain at the club.

Adrien is a classy player and it’s no surprise to hear Everton and Southampton are also interested in the midfielder. However, at 28 years of age, it’s got to be considered unlikely that Ronald Koeman or Claude Puel would push their clubs to spend €40m.

Sporting say a lot of things, it doesn’t always mean they happen, and Leicester, Everton, and Southampton would be recommended to keep an eye on the situation and wait for the best time to strike… and offer less than €40m.