With the Portuguese League proving to be a great place to watch some young talents, English clubs have started their scouting job early this season.

Benfica played Belenenses in Lisbon this Saturday, and as reported by local newspaper A Bola, both Everton and Sheffield Wednesday had officials at the game.

The outlet doesn’t point out who each club were watching, but Sheffield Wednesday have been particularly interested in the Portuguese market since Carlos Carvalhal’s time at the club, and the same goes to Everton and Marco Silva. 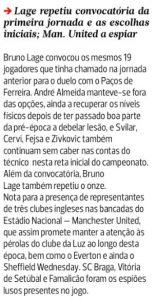 It’s hard to think of who the English clubs could be watching, especially because they have totally different situations.

While Everton could have the conditions to sign some Benfica stars, Sheffield Wednesday would be more likely to get Eagles’ players on loan, or perhaps target some Belenenses players.

The Toffees got linked to multiple Benfica players in the past couple of years, but it never seemed like things went through.

Manchester United, who never miss a game of either Benfica, Porto or Sporting, have obviously attended to this match as well.