Home Europe Everton seen as strongest club in race for forward, down to club’s...
SHARE

Everton interest in signing Islam Slimani from Leicester City is highlighted by the Portuguese press this Thursday.

In a really short paragraph, newspaper Correio da Manhã claims that the Toffees have just joined the race for the Algerian international.

The local press’ interest in Slimani is because Sporting are trying to sign the player back, but are having a hard time due to Leicester City’s demands to let him go permanently, not on a loan deal.

Correio da Manhã writes that Everton’s presence in the race is making things even harder for the Lions, while Fenerbahce are also involved. 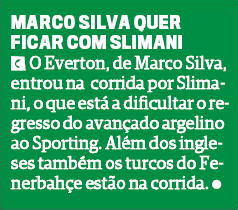 The problem is that in the past couple of days, Everton’s interest has been reported by the Turkish media, with the Algerian press also covering it. So it becomes a bit hard to know if Correio da Manhã are reporting something they know or something they’ve just read elsewhere.

There’s also the possibility the claims has originated from one of the growing number of opinion articles claiming *insert club here* must sign *insert player here*.

In any case, Everton interest in Slimani is seen as a problem for any club outside of England who wants him, since the Toffees can easily win this financial auction.