Everton had scouts at Benfica’s clash with Sporting last night, which the away side won 3-1.

That’s according to A Bola, who have the Blues among several other sides who all sent scouts to watch the game.

Premier League scouts being in the stands for games in Portugal is nothing new, with it an almost weekly occurrence that someone from a top-flight club is in the stands.

A big clash like this was sure to attract the viewers, and that was certainly the case, with A Bola reporting Everton were among a host of clubs to send representatives to watch the game.

The newspaper makes no mention of who they were there to watch, but the obvious name is Matheus Nunes.

He was heavily linked with a move to Everton throughout the summer and, at one point, appeared to have sealed a switch to Goodison Park.

That never happened, and he remained in Portugal, where he has since established himself as the star for Sporting this season. 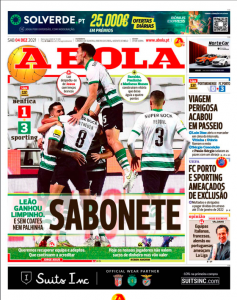 And he was again in this game, with a goal and an assist in an otherwise man of the match performance that certainly caught the eye. He’s the obvious target for the Blues, and it’s surely no coincidence that they were there to watch this game and him shine in it.

Elsewhere, the likes of Pote, Paulinho and Paulo Sarabia were all in good form for Sporting as well, as was Pedro Porro, who is a right-back and certainly what Everton need at this moment in time.

He’d be another target that would make sense, but it’s hard to look past Nunes as the man they were watching here, and if they were, they’ll have been mightily impressed.

Thomas Tuchel wants Chelsea signing ‘at all costs’ – Blues have...