Everton were one of the Premier League sides who scouted the match between Porto and Paços Ferreira last night, according to local newspaper O Jogo.

The Toffees’ visits to Portugal have been pretty usual since Marcco Silva took charge of the club, and things seem to be more intense with the Dragons, since they’ve been scouted several times this season already.

We’re still to see Everton being strongly linked to a Porto player this season, though, so all we can do is to keep an eye on these matches and see those who stand out.

Last night, Porto won their game 2-0, with goals scored by Mamadou Loum and Zé Luís, the latter with a pretty good bicycle kick. 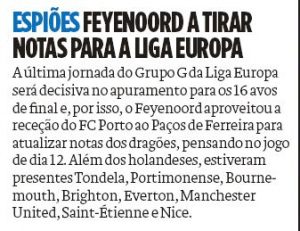 But it turns out it was Brazilian left-back Alex Telles who was picked by O Jogo as the man of the match, due to his good performance both in defence and attack. He was linked to Everton in the last year, and is protected by a release clause of €40m, and probably not needed unless something happens with Lucas Digne.