Such is the frequency with which Everton scouts are in Portugal these days; it’s more of a shock when they’re not there than when they are.

There were none to be had this week, though, with A Bola reporting that the Blues were once again doing their homework in the country.

This time there was a scout in attendance at Benfica to watch their Champions League win over Lyon last night.

That will not come as a surprise to anyone given Everton have regularly been attending Benfica games for the last few months and, well, their manager is Portuguese as well.

Most of the time they’ve been at the games to catch a glimpse of Nuno Tavares, with O Jogo stating back in May that he’s a player they could ‘reserve’. 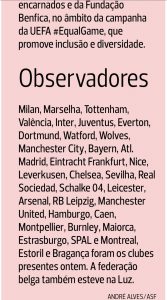 Sadly if they were there to watch him, they’d have been left disappointed as he wasn’t in the matchday squad on this occasion.

Namesake Tomás Tavares put in a solid display at right-back, though, earning a 3/5 from Record and 5/10 from O Jogo.

On the opposite team, there’s every chance Everton were also at the game to check up on Lyon’s Bertrand Traoré given how heavily they were linked with him during the summer transfer window. He also received a three and a five after coming off the bench.