With Portugal a well-known hotbed of talent these days, it’s never a surprise to learn Premier League clubs have scouts watching games.

Barely a week goes by in which scouts from various English clubs aren’t spotted at a game in Liga NOS, and this week it was Everton’s turn.

The Blues regularly have scouts watching games in Portugal, usually at either Benfica or Porto, and it became something of a regular thing for the Portuguese newspapers to le us know about it during Marco Silva’s time in charge.

It’s died down a bit since Carlo Ancelotti replaced him but, it seems, they still have an eye on potential players in the country.

A Bola report that Everton had someone in the stands to watch Vitória Setúbal’s 2-1 defeat against Gil Vicente on Friday night.

The newspaper doesn’t make any suggestion about who they were there to watch, just that they had someone in the stands.

The likelihood is they were there to see if anyone caught their eye, in which case Sandro Lima is likely to have done so.

He was the star performer in the game, with A Bola awarding him a seven out of ten and man of the match award. 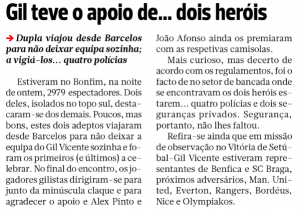 Everton weren’t the only team who sent scouts to the game, with Manchester United, Rangers, Bordeaux, Nice and Olympiakos, as well as Portuguese duo Benfica and SC Braga, all sending representatives too.