We’re now starting to get pretty sure that Everton have a target at Benfica this season.

The Toffees have scouted an impressive amount of games of the Eagles in the past year, and after watching them playing in the Europa League against Galatasaray last Thursday, officials were back at Estádio da Luz this Monday night to see their league game against Chaves.

Newspapers A Bola, Record and O Jogo all report Everton’s visit to the match, but they continue not to know who the club are keeping an eye on.

Last week, we pointed out that the Toffees had been linked to Andrija Zivkovic back in December, but things have gone pretty quiet since then. He even had a few minutes last night, but wasn’t able to do much. 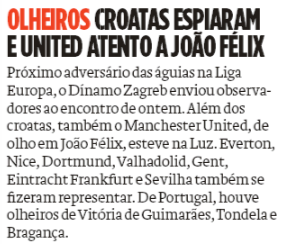 But with Benfica’s 4-0 win, there was a lot to see and to get impressed with.

The man of the match was João Félix. The 19-year-old had a part in all the four goals, having scored the second and assisting for the fourth. Newspaper Record gave him a five out ot five rating.

Other players such as Florentino, Pizzi and Haris Seferovic all impressed with a great display as well, and certainly got the attention from the scouts who were present.

The other clubs who had emissaries at this match were Manchester United, Nice, Borussia Dortmund, Real Valladolid, Gent, Eintracht Frankfurt and Sevilla.