Securing the services of Allan and expecting both Abdoulaye Doucouré and James Rodríguez to sign in the next few days, Everton fans are being treated to a decent start to the window.

It was no secret Carlo Ancelotti wanted to bolster his midfield following some of last season’s lacklustre showings, but there is another area that needs help: right-back.

The loan of Djibril Sidibé helped cover the cracks somewhat, but the Frenchman was kindly asked to return to Monaco, meaning a new player is needed.

Perhaps Jonjoe Kenny will stick around and provide Seamus Coleman the competition he needs, but the many reports linking the Toffees to both Santiago Arias and Alessandro Florenzi suggest that isn’t going to happen.

We’ll focus on the latter of the two here, as Corriere Roma explain the Italian finds himself in a rather interesting situation.

A starter for the national team, Florenzi is deemed ‘a redundancy’ by his club and therefore is ‘on the market’. 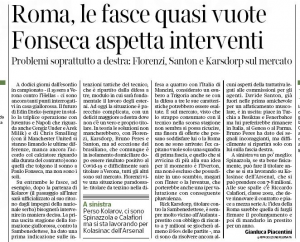 However, ‘so far no offers that can satisfy him or Roma have arrived’.

It’s explained Florenzi ‘only wants a first-tier team, and the one that comes closest to this idea for the moment is Everton’.

That’s good news for Ancelotti and Marcel Brands, as it hints the player would be open to moving to Goodison Park, but for that to happen, they need to make a good offer.