It’s now no secret that Everton tried to sign Donny van de Beek from Manchester United in the summer.

The Toffees’ director of football Marcel Brands has said as much, who also hinted they may return in January for the Dutchman if his situation at Old Trafford doesn’t change.

For now, it hasn’t, and the Netherlands international has found himself throwing chewing-gum around to show his displeasure.

Corriere dello Sport look at van de Beek and what could happen to him this summer, highlighting that Juventus, now managed once again by Max Allegri, are starting to weigh up a move for the Manchester United man. 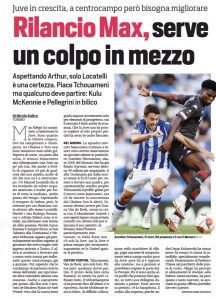 That being said, they aren’t the only ones, and it’s pointed out that Everton ‘remain particularly interested’ in the midfielder, as his agents have ‘now initiated contacts with various clubs to relaunch their client’.

To hear that isn’t surprising in the slightest, since van de Beek’s disappointment is rather public, and it’s in his representatives’ best interests to get him out of all this if they can.

Whether a move to Everton is what he needs remains to be seen, but if Brands wants him, that suggests Rafael Benitez does too, which should equal more game time for the United wantaway.