Philippe Coutinho was heavily linked with a move to England last summer, but the Barcelona owned player ended up joining Bayern Munich on loan.

After the Bavarian club decided against making the Brazilian’s transfer permanent, the La Liga winners have made the former Liverpool man available in the market and he’s backed to return to the Premier League.

Sport on Wednesday claim Everton are viewed as one of the transfer options available for the 27-year-old in the next transfer window.

It’s claimed Coutinho’s agent has knocked on ‘many doors and there are several clubs in England ready to welcome Coutinho on loan’.

Over the past couple of weeks, various reports from the Catalan media mentioned Chelsea, Spurs and United as clubs who could take the South American. Carlo Ancelotti’s side have now been added to that list.

Earlier reports indicated Coutinho has ruled out a move to Old Trafford because of his past association with Liverpool. 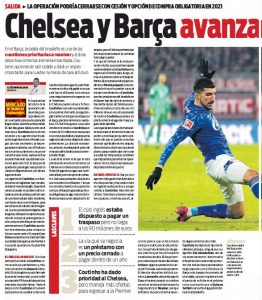 This could also be applicable for Everton, who are the derby rivals of the Anfield club.

For now, Sport only state Everton are one option for Coutinho, but there isn’t anything to suggest Ancelotti’s side will sign him, even if it’s on a temporary deal.