This has led to the Italian press getting mildly giddy about the prospect of a reunion between Carlo Ancelotti and Hirving Lozano at Goodison Park, thus allowing Napoli to somehow make their money back on what looks to be a poor investment for the time being.

However, there’s another name that’s been popping up here and there: Cengiz Ünder.

The Roma forward, once targeted by clubs such as Arsenal and Tottenham, has started just nine league games this season from a possible 19 (he missed nearly two months through injury), and while he has three goals in 20 appearances in all competitions, there’s a feeling his time is running out in Italy’s capital.

That’s where Everton come in, and Gazzetta dello Sport state the Toffees are ‘ready to be bring him home’. 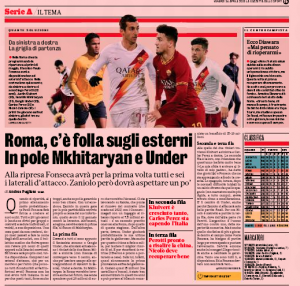 The Italian newspaper explain he will ‘almost certainly’ be the first profit of Roma’s summer, as the €15m they originally spent on him have been ‘well amortised’ over the past three years, and with a hope of selling for €15-20m, that would go straight in the bank balance as a financial gain.

That means his next few games, if they get played, are likely to be his last in his current club’s search, and could end up being the perfect opportunity for him to prove himself to potential suitors, like Everton.

Speaking of the Toffees, it’s also no secret Roma have a soft spot for Moise Kean, although he isn’t mentioned in this story.

That being said, if there ever was an asset to try and make any negotiations with the Serie A side smoother, the Italy international is certainly up there if needed.