Gazzetta dello Sport report Carlo Ancelotti has given his ‘yes’ to Everton and the Italian will sign a contract lasting until 2022.

They believe there was a ‘decisive meeting’ in London on Monday with Alisher Usmanov, and also state Farhad Moshiri was ‘instrumental’ in the business.

Of Usmanov, they say: ‘a former shareholder of Arsenal, deep relations with Putin, but also with institutions Italian. Usmanov, bound by friendship and business with the owner of Everton, the Iranian-British investor.’

That would create a whole new slant on the claims and be a story in itself. Everton fans wouldn’t mind extra investment, and if Usmanov has been involved in the Ancelotti appointment then it would suggest he has an interest going forward. 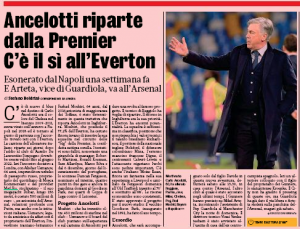 Gazzetta also say Ancelotti will be joined by his son Davide at Goodison Park.

Gianluca Di Marzio joins the Italian chorus and says an ‘agreement was reached in the night’.

Now that terms have been agreed between Everton and Ancelotti, the next step is getting the approval from Aurelio De Laurentiis.

The Toffees will hope they face an easier task than Chelsea had when they had to negotiate with the Napoli president for Maurizio Sarri.

Despite the Serie A club having parted ways with the manager, it doesn’t automatically mean De Laurentiis will play ball easily, and he has a long and well earned reputation of being as awkward as possible.