Everton and Sporting ‘already have agreement’ for the transfer of Matheus Nunes, and that’s splashed on the front page of today’s A Bola.

Within the report, it’s stated the midfielder’s move to the Merseyside club is ‘imminent’ after his employer ‘practically closed the deal’ with the Toffees for €18m.

The newspaper are confident the deal will go through and add ‘it will be a matter of time’ before both clubs announce the 22-year-old’s transfer.

Apart from the fixed fee of €18m, additional €2m is to be paid in bonuses. The Premier League side have chasing the Brazilian for a while and talks between the two clubs have been going on for a few days.

There has been a ‘significant development’ in ‘recent hours’, that has resulted in both sides practically closing the agreement. An option to take Nunes on a loan deal with mandatory purchase option was on the table, but Rúben Amorim’s side didn’t favour this deal. 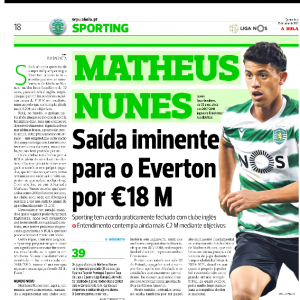 A Bola add Everton have also reached an agreement with the player, worth €1.2m per season. This means he will see a raise of €1m on his current salary.

It’s not clear when Nunes will be allowed to travel to England to undergo his medical, but sources close to the operation suggest it could happen ‘very soon’.