Everton aren’t simply referred to be their name in Italy, often it’s ‘Ancelotti’s Everton’ and it’s been that way since the manager took over at Goodison Park.

The club have been linked with endless signing options in Serie A, with the players being linked right now not quite as exciting as they once were.

At one point it looked like Everton would be in a battle for the top four and Champions League football. Ultimately they finished a disappointing tenth, and that will impact transfer targets accordingly.

La Repubblica report ‘Ancelotti’s Everton’ are at the front of the queue to sign Joaquin Correa from Lazio, with La Liga clubs also being keen.

The 26-year-old Argentine plays mainly as a second striker, and scored eight times in 28 Serie A appearances last season. 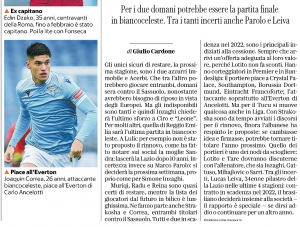 Correa doesn’t immediately jump out as a player who could help take Everton to the level required.

Interestingly, he’s represented by Alessandro Lucci, who also represents Matias Vecino and Juan Cuadrado, two others who have been linked to the Toffees.