Bertrand Traore failed to start regularly for Lyon in the final few months of the 2018/19 season.

Today’s edition of French newspaper L’Equipe claims the winger is no longer popular with fans, and his employer would not oppose his sale in the summer transfer window.

It’s further claimed that Everton ‘pushes’ for the signing of the Burkina Faso international.

The Ligue 1 side have ‘opened discussions’ with the Toffees regarding the former Chelsea man, who still has three more years left on his contract at the Groupama Stadium.

If Marco Silva’s side table an offer for the 23-year-old in the transfer window, Lyon would be ready to ‘study’ the proposal, especially after dealing with his situation for several months. 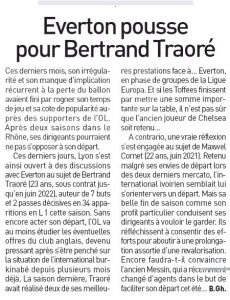 The French club are unhappy with Traore’s irregularities and failure to recover the ball on a regular basis when possession is lost.

If the Merseyside club table a ‘significant offer’ for Traore, Lyon are unlikely to retain the player.