Whenever Barcelona are looking to offload fringe players, it’s inevitable that Everton will get a mention. The signings of Andre Gomes, Yerry Mina and Lucas Digne have made sure of that, and going further back, Gerard Deulofeu’s move.

This is the case again for Rafinha Alcantara, with Barcelona looking to offload the player. There’s already been claims they’ve tried to sell him to Leeds United for €16m, using the player’s close relationship with Rodrigo Moreno, but that track failed.

Monday’s edition of Sport states ‘many’ teams are keen on Rafinha, including Everton, Arsenal and West Ham. That feels very much like wishful thinking from the Catalan newspaper.

Despite their headline reading the player’s price ‘does not drop below’ €16m, in the article they make clear €15m should do it.

Everton also get a mention when it comes to Jean-Claire Todibo, with it claimed he has ‘no shortage of suitors’, despite no club moving seriously for the signing yet. 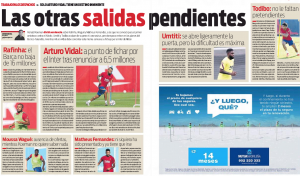 Barcelona may be trying to send these players to Everton, and it’s worth a try given past business, but that’s all it feels like right now.

It surely can’t be long before the Samuel Umtiti reports get going.