The Italian forward has endured a difficult time on Merseyside since joining from Juventus last summer, failing to establish himself under Marco Silva or Carlo Ancelotti.

As a result, there have been numerous reports about a potential return to Italy in this transfer window, with Juventus keen to have him back and Kean thought to have prioritised a return above all else.

Juve don’t have the cash for a permanent deal, though, so Mino Raiola has been working on Everton to try and convince them into accepting a loan offer instead.

A report today stated that they were coming around to that way of thinking and willing to sanction a loan deal so long as they got €25m at some point and secured a replacement first.

Kean’s desire to go back to Juve has meant they’ve been presented as the only interested party, but Corriere Dello Sport now say that PSG ‘asked’ about the young striker. 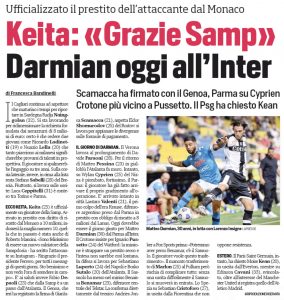 They say he is ‘coming out’ of Everton, and the French side are eyeing him as a replacement for Edinson Cavani, who left on a free transfer earlier this summer.

That is quite literally the extent of what the newspaper offers, failing to state whether PSG are willing to match Everton’s demands or if they’ve even been in contact with the Blues about a possible move.

Still, it seems the interest is there, and this is one emerging rumour to keep an eye on as deadline day gets closer and closer.