Everton were one of the clubs interested in Jean-Clair Todibo in the winter market.

The Barcelona centre-back ended up joining Schalke on loan and they have an option to make his transfer permanent for €25m.

Sport explains the Bundesliga side are satisfied with the defender’s performances, but they will not be able to make his transfer permanent due to the economic crisis.

Schalke have asked to extend centre-back’s loan for one more season, but this isn’t appreciated by the La Liga winners.

A few weeks ago, the Toffees contacted the Catalan club to understand their plans for the Frenchman and Everton were made aware Barcelona’s priority is to sell him for €25m.

Carlo Ancelotti’s side are unwilling to meet the Blaugrana’s demands and have proposed an offer of €20m plus €5m in bonuses. Although the player’s plan was to succeed at Camp Nou, he has now given green signal to move to England.

Barca wanted to include a buy-back option, but ‘it looks like it will be impossible’ to find an agreement for that with Everton. The move is ‘advanced’ and Quique Setién’s side must take a decision in the coming days. 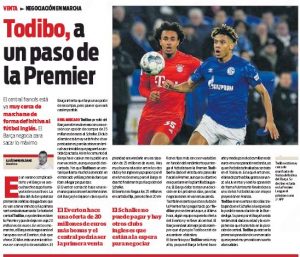 There are other Premier League clubs who have asked about Todibo and the Spanish side will sell him to the highest bidder.

Sport reckon Todibo is ‘one step away from the Premier League’.

Whether he will end up at Goodison Park or another club remains to seen.