Rumoured Everton target Joaquin Correa has made it clear he wants to leave the club this summer.

That’s according to Tuttomercatoweb, who carry comments from Lazio manager Maurizio Sarri regarding the situation.

Correa has been heavily linked with a move away from the Italian side for several weeks, having reportedly told them he wants to leave earlier this summer.

Everton have repeatedly been named as suitors, alongside Inter Milan, with reports this week indicating they are stepping up their efforts to get the Argentine.

Sarri has now commented on the situation, confirming Correa has made his stance clear to the club.

“We are talking about a strong player, but he has expressed his idea about the future at an early stage,” TMW report him saying.

“He’s not in the ideal mental condition to play matches. He’s doing very well; he gives everything in training.

“I’d see him as an outside player or as a central striker. We have Immobile, who is clearly a reference point, perhaps the most important reference point.”

Whether Correa does actually end up at Everton remains to be seen, with their financial situation suggesting a move would be difficult.

The Italian media are insistent it’s happening, though, and that is certainly the line Il Messaggero and Il Tempo are taking.

The former reported yesterday that Lazio are ‘ready to sell’ to the first club that offers what they want and to keep an eye on Everton. 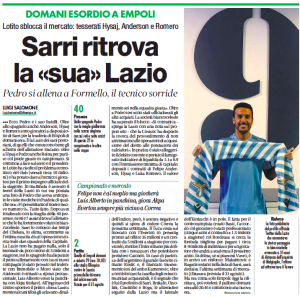 That was followed by more details today, with it stated that ‘Everton pushes’ for the player, but he is taking his time making a decision.

Il Tempo, meanwhile, say Everton are ‘pressing’ for Correa and are ready to make a €35m offer and give him a €5m a year contract to boot.

That seems a little optimistic but what is clear is that the interest is there and, if everyone is to be believed, the Blues are working on trying and getting a deal done.