There was little sadness in Madrid when James Rodriguez left Los Blancos for Everton in the summer transfer window, apart from the odd article suggesting Zinedine Zidane has his favourites and won’t move away from them.

Getting €25m for the Colombian was seen as a good deal when combined with removing his wages from the bill. Even when it turned out there hadn’t been a transfer fee at all, that was largely ignored.

What can’t be ignored is how well Rodriguez has done since his arrival at Goodison Park, easily becoming one of the best players in the Premier League so far this season.

Marca put it partly down to his relationship with Carlo Ancelotti, yet say there’s more to it than that. According to the Spanish newspaper, Everton’s manager insisted to Rodriguez he needed one thing from him: To arrive in the best physical shape possible.

Training in Portugal whilst awaiting his move, the South American did that, motivated by a desire to show everyone he’s still a ‘crack’ of football. Marca say Rodriguez wants to ‘conquer the world’, and start that by being prominent in a good Premier League season.

He’s clearly motivated by people thinking his best days are behind him, and that a move to Everton was further indication of his slide. 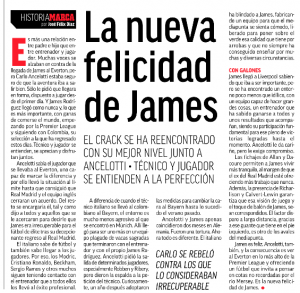 This coincided with Ancelotti being certain he would ‘take care of the rest’, something he told the player. As Marca have it, the Italian dismissed concerns put to him that Rodriguez was ‘irretrievable for elite football’.

Ancelotti was having none of it, sure that he could help James Rodriguez find ‘happiness’ again and get his best form back. So far, he’s been proven right, and should Zidane fail to succeed with Real Madrid this season, then there’s going to be questions asked over why the Frenchman was unable to get what was required out of the player.