A year ago Yerry Mina was still a Palmeiras player, about to go through a remarkable twelve months with ups and downs.

In the January transfer window, the then 23 year old moved to Barcelona and quickly the Catalan media were on his back. There were tales from training of people being surprised at Mina’s level… it was thought he was nowhere near ready to play for the Spanish club, and there were doubts if he ever would be.

Mina had cost Barcelona just under €12m and there was a worry whether they’d be able to get the money back. A loan elsewhere in La Liga was thought to be the best option.

Then the World Cup happened, and the defender was one of the stars of the show.

After countless transfer rumours he eventually joined Everton for around €30m, and is still trying to find his feet in the Premier League.

Barcelona have been looking to add numbers in central defence since and after Mina was their first Colombian, they’ve signed another in Jeison Murillo from Valencia. 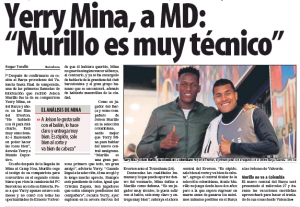 The pair are friends, and showing there’s no hard feelings, Mina has spoken to Catalan newspaper Mundo Deportivo to give his own backing to the transfer, and a scouting report: “He is a very technical player, he likes to go out with the ball, he is very clear and he delivers the ball very well. He is quick, he goes well to the tackle and is good with his head.”

Murillo will hope he’s not as easily cast aside as his friend. If he is, maybe Barca can look towards Everton again.