The winger has just joined Lisbon side Sporting on a one-year deal, and now talks about his hopes of impressing the club so he can perhaps move on a permanent transfer at the end of the season.

“First of all, it is an honour to have the opportunity to play for a club like Sporting. I have to look at things step by step, because we can never predict the future,” Bolasie told Record.

“As you all know, Sporting have the option to buy me at the end of the season, but it’s the performances that will speak for me on the pitch. That’s up to me: going on the pitch and doing my best to help the team achieve positive results.”

Two Portuguese outlets have reported Sporting’s option of buying Bolasie at the end of the season. The Lions can get him by paying Everton €4.5m. 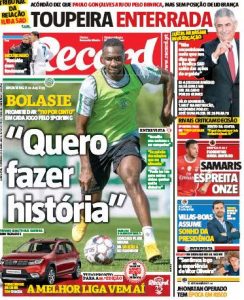 The loanee has already been asked if he’s going to do the ‘Bolasie move’, and he’s told the entire story about the skill.

“Many of them are Portuguese and believe it or not, they are here in Portugal now and they come to see me play! I liked the idea and one day I ended up doing their wish (laughs). Of course nobody outside knew that, but my friends from school knew it since we were 12, we have been talking for over 15 years! I hope to do it at Sporting, but first and foremost, of course, are the results. The most important thing for me is to try to win games because this club has to go back to where it belongs. Not winning the league since 2002 is a long time.”

Bolasie claims to have known about Sporting for a long time, and that’s not the same case as when players pretend they’ve always dreamed of signing for some club. He actually has a nice story about his relationship with the Lions.

“My father used to tell me a lot about the club, because his best friend is Portuguese and a Sporting fan. That’s where this relationship comes from. His friend was always talking to him about Sporting. Sporting this, Sporting here, Sporting, Sporting, Sporting, Portugal… (laughs). My father was always following because of that. I personally began to see more closely from Ronaldo’s debut. I remember seeing the stadium when he played against Manchester United. He was the kind of player I wanted to be, to do skills, dribble past others… But my father had known Sporting for a long time. He didn’t play football, but he was a big, big football fan.”

Speaking of Sporting’s fans, he says they were one of the motives behind signing for the club: “And that’s probably another reason why I came to Sporting, because I could have gone elsewhere, could have made a lot of money. But what matters to me is the passion, the club, the fans. This is what I feed on. This is what gives me a stage where I can show people what I can do.”

If he shows enough of what he can do, it’s likely Sporting will use their clause with Everton.