Inter Milan have ‘found a wall’ in their efforts to sign Lucas Digne from Everton, who are not accepting the idea of a loan deal for the Frenchman.

That’s according to Tuttosport, who say the Toffees have ‘closed the hypothesis’ of the full-back leaving on loan this month.

They explain that despite the fact the situation with the Frenchman and Rafa Benitez is ‘irremediable’ and they have signed a replacement for him, Everton are playing hardball over Digne.

It’s a ‘surreal’ situation, but they only want the player to leave on a permanent basis, something Inter Milan are not willing to offer.

They need a new left-back, and Digne has been named among the targets over the last few weeks but don’t have the finances to match Everton’s demands. 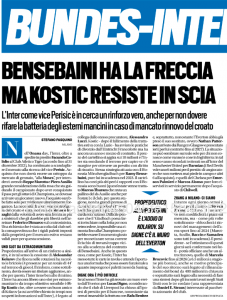 Instead, they would prefer a loan deal with a right to buy tagged onto the end of it, something the Blues simply aren’t willing to accept.

They have ‘erected’ a wall around the Frenchman when it comes to negotiations, and so it is now ‘more difficult’ for Inter Milan to sign him.

Of course, there is plenty of time left for that to change this month, but at this moment in time, it seems Digne is unlikely to be joining the Serie A champions.