Home Europe Everton player a ‘new goal’ for scouts of another club, move would...
SHARE

After a year at Watford, Richarlison left the Hornets and completed a switch to Everton in the summer.

The forward has enjoyed a good start to his life with the Merseyside club and has scored three goals in three league appearances. His form for the Toffees saw him make his debut for Brazil and in his second game for his country he scored a brace against El Salvador.

Mundo Deportivo has a story about the South American on the back page of Friday’s edition of the Catalan newspaper and they claim the 21-year-old’s impressive displays for club and country have seen him draw Barcelona’s attention.

The La Liga winners’ scouts have set a ‘new goal’ in the Premier League and it’s Marco Silva’s star player. Richarlison revealed in an interview with AS that it’s his dream to play for Barcelona and Real Madrid, which should come as an encouragement for the Spanish champions. 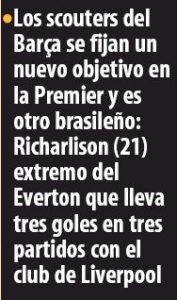 So far, the report just suggests that scouts will watch the player in action for Everton and there is no mention that Barcelona will make an approach for him in January or next summer.